The incredible voyage of Ulysses / text and illustrations by Bimba Landmann

The incredible voyage of Ulysses - Copie

Abstract: After defeating the Trojans in an intense, ten-year war, the Greeks' courageous leader, Ulysses, king of Ithaca, begins the voyage home with his soldiers. There his faithful wife, Penelope, and his young son, Telemachus, await him. Ulysses never imagines that the journey home will be another ten-year quest in which he must confront all kinds of terrifying obstacles, including giant cannibals, one-eyed monsters, an enchantress who turns his men into pigs, and the tempting song of sea nymphs who try to lure him and his men to their death. But Ulysses is a daring and clever man, willing to take on all that life and the gods put in his path in order to reach his home. This retelling of the Greek poet Homer's epic tale is accompanied by beautiful and bold illustrations reminiscent of ancient Greek art. The graphic-novel-like style of the book, in which text and illustrations are tightly interwoven, creates a compelling world filled with drama and mystery certain to draw in young readers. Ages nine to twelve. 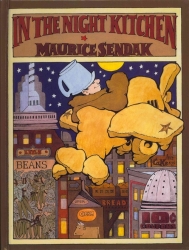 In the night kitchen Maurice Sendak
0 0 0

In the night kitchen / Maurice Sendak

In the night kitchen - Copie